In my Ph.D. thesis I build a microscope with a parabolic mirror as focussing and collective element for confocal and near-field measurements.

Near-field measurement with a gold tip on a smooth gold surface show the ability of this system for ultra high resolution microscopy and spectroscopy. 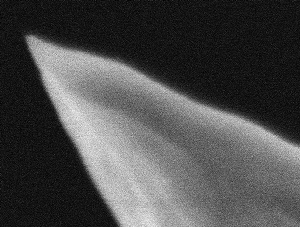 A solid gold tip is placed in the focus of the parabolic mirror. The mirror produce, when a radial laser mode is used, a very strong field along the tip, which excite plasmons in the tip. The plasmons in the tip oscillate along the tip into the apex and create a image charge on the metal surface. Between the apex of the tip and the gold surface a huge field is created, which can excite molecules or nano particles situated in between. Since the strongest field is situated directly under the tip, the resolution depends on the size of the tip apex. The tips are electrochemical etched to a end face size of 10-20 nm (checked with SEM).

For example:
A gold surface with a roughness of some nanometre is prepared on a silcon surface in UHV. A layer of molecules is adsorbed on the surface as a field detector. The strong field can enhance the Raman signal as described as electromagnetic field enhancement in the surface enhanced Raman scattering. 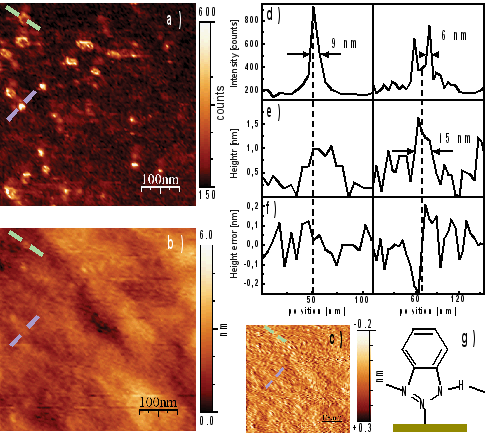 The picture show a scan of such gold film, very small 1-2 nm high protrusion on the surface give a very strong optical signal by promoting the signal between the tip and the surface additionally. By carefully analysis of spectra of this area impurities can be excluded. The signal only originates from the Raman of the molecules and photo luminescence of gold.

This photo luminescence can be used to detect the field intensity instead of the molecules, thus a pure gold surface is used for this experiments. The contrast in this measurment reach not the level of the Raman measurements, but is strong enough to get a reasonable scan image, with a comparable resolution.

The behaviour can be calculated by a simple electrostatic model, which take the tip as a charged sphere and its image charge with the field in between. 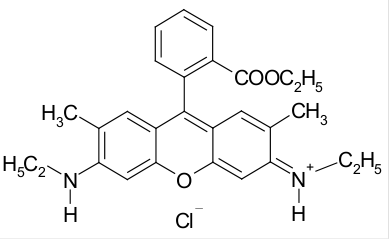 In my diploma thesis and meanwhile the study i worked on single molecule surface enhanced Raman scattering (SM-SERS) of Rhodamin 6G (R6G) with silver colloid made with the recipe of Lee and Meisel. With this colloid a big problem exist, even the preparation method is not altered, some of the colloidal solutions are active others are inactive. Active in this case means: it is possible to make single molecule SERS measurements, with inactive colloids such measurements are not possible. But this doesn't mean this colloidal solution is really inactive, since SERS with higher concentration of molecules is still possible. The main question is: Whats the difference of this two types of colloids and if this could be checked before prepare a single molecule sample. The exact properties of such colloidal solution depends on very much things in the production process, even the stirring speed can result to a different result. The absorption spectrum doesn't give a good definition of an active or inactive colloid. 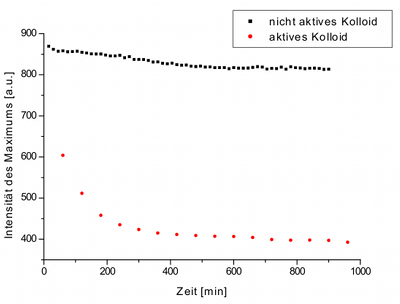